We’ve always LOVED mashed potatoes around here BUT two things happen(ed).  But before the story here’s the table of contents…

Why I Make Crockpot Mashed Potatoes

First, somehow I got nominated annually (and I mean EVERY year) to peel 50+ pounds of spuds at an annual Thanksgiving family gig.  I was young and it wasn’t my house so I didn’t argue.  But it wasn’t my potato peeler either.  And I got epic amounts of blisters from the dang thing (every year).

I probably should have just taken my own, but I didn’t.  I didn’t even think about it.  But it put a sour taste in my mouth about peeling them.  I sorta developed a sincerely dislike for mashed potatoes in general for a while.

Then that family gig thing got changed (not because of the potatoes or anything) and I didn’t have to peel them anymore.  I still hated doing it though.  For years.

Then second, I read a recipe called “country-style mashed potatoes” with the peels ON. Duh, once I’d read that I guess my eyes opened.  I saw recipes for unpeeled mashed potato recipes all over the place.

So it isn’t a new thing, but at the time it was new to me.  And I was tickled.  I loved the idea and proceeded to teach myself how to make crock pot mashed potatoes.

That was several years ago.  This is the recipe I’ve been making ever since.  Yes, they DO get peeled on occasion now.  Sometimes when the recipe calls for it, sometimes as a request.

This recipe is VERY good with or without peeling the potatoes.  The cream cheese adds a wonderfully creamy texture that’s absolutely delicious too.

This part couldn’t be easier.  You gather your ingredients and wash and dice the potatoes. Toss the ingredients in the slow cooker and cover and cook for about 6 hours on low.

Some folks swear I goof up because I toss the cream cheese in before the recipe is cooked. I personally think this is a matter of personal preference.

So this recipe sounds awesome and you want to make it?  But what the heck to serve with??? Gotcha covered…check out any of these ideas 🙂 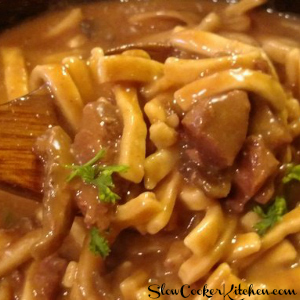 When you sign up you'll be the first to receive our new recipes...You'll also receive our FREE "18 Most Popular Recipes" eBook!

Slow Cooker Kitchen/AmaZanZo LLC/Gwen Jones is a participant in the Amazon Services LLC Associates Program, an affiliate advertising program designed to provide a means for sites to earn advertising fees by advertising and linking to Amazon.com. Purchasing through our links will in no way increase your price, we receive a small commission.

Check Out the Newest Stuff…