These slow cooker stuffed peppers are classic comfort food BUT did you know there are ALL SORTS of variations? There sure are!

I knew there were modified recipes for low carb and vegetarian eaters. I also knew there were Cajun and Tex-Mex versions.  But I had NO idea there were sooooo many versions of this classic deliciousness out there.

Some are cooked in a crockpot because this is a slow cooker site and all. Others call for the peppers to be baked BUT all of them CAN be made in the slow cooker OR a pressure cooker OR baked. 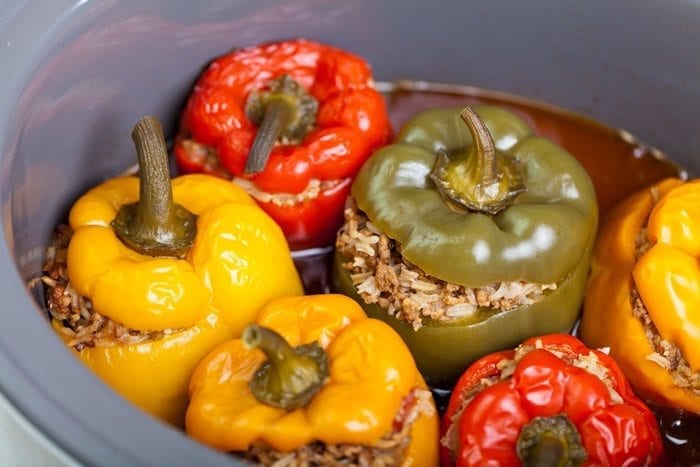 Legal Stuff: This post might contain affiliate links. That means, if you purchase something through one of the links, SlowCookerKitchen makes a small commission. It does NOT increase your price. Everything recommended it stuff we have tried and/or have researched to the point of insanity. Here's the full disclosure policy if you want to read it.

I’m so not an expert on this stuff. I’ve researched a LOT and I’ve asked around. It works, the conversions I mean. And I cook in an oven, a toaster oven and own 3 different, wait, 4 now because I bought a Carey on sale last week… so I have 4 kinds of pressure cookers or canners.

Anyway, you CAN cook slow cooker stuffed peppers in a crockpot, in the oven, and in a pressure cooker. 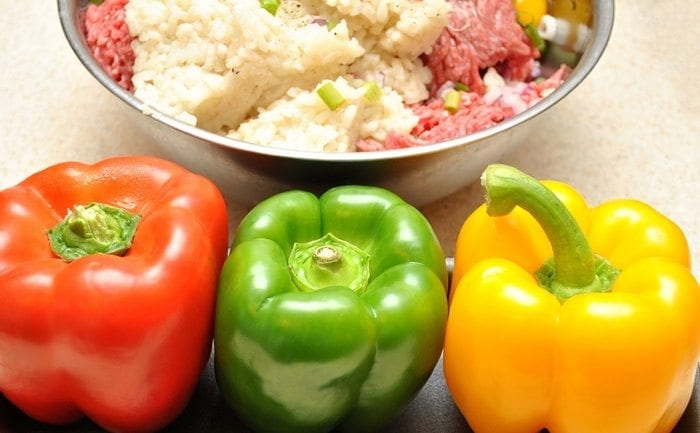 Basically, you need to cook your stuffed peppers between 6 and 8 hours on low. That’s if your chosen recipe has any raw ingredients. That includes meat, rice, or vegetables.

IF all your ingredients are cooked…except for the pepper everything is stuffed into, of course, sometimes you can get away with 5 hours. I don’t have evidence but I think it depends on the thickness and size of the pepper itself.

So, airing on the side of safety and not causing food poisoning from consuming undercooked meat…I’ve always cooked mine on low for at least 6 hours. And then cut one open to check the center before serving.

That’s just me. I do prefer a medium-rare steak…just not undercooked ground beef. Or heaven forbids, pork or chicken. Ugh. 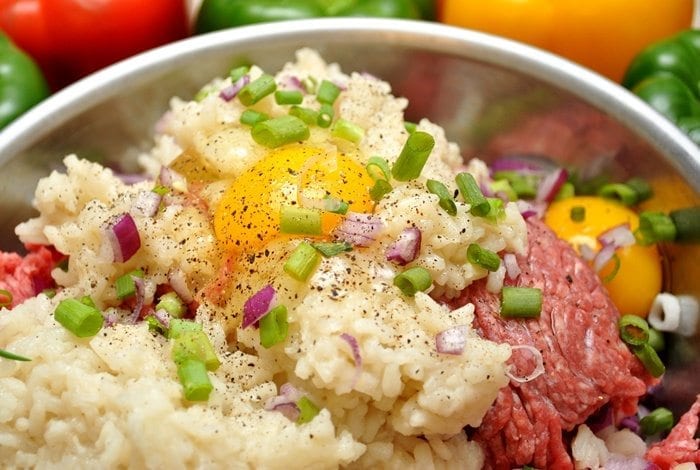 I researched this one a lot. Mainly because I don’t use my oven as often as most foodies.

I got used to using my slow cookers a long time ago. And then I just stuck with them. That’s over on the “about” page if you want to read it, no need to repeat it all here.

The recipes I’ve made with stuffed peppers in the oven all used pre-cooked rice. And after reading up and thinking about it I finally had that light bulb go off.

To cooked stuffed peppers in the oven with uncooked rice OR meat you need to use a covered dish. I’m not just talking here. I cooked a lot of peppers to see if I was right.

The ones in the covered dishes with sauce surrounding them cooked much better. The peppers need the moisture from the liquids and it needs to be covered by either a lid or by “tenting” foil.

On most of the recipes I read and/or baked, temperatures vary between 350 and 400 degrees. Cooking times varied from 30 to 60 minutes too.

Uncooked rice, raw meats and/or uncooked vegetables: You’ll need to bake between 350 and 375 for 45 to 60 minutes. If you use uncooked rice, you’ll need to add extra liquid to the meat mixture (for the rice to absorb) and a puddle of sauce around the peppers too.

Cook Times for All Cooked Ingredients

If you’re going to use pre-cooked meat or leftover chili or something. No worries, you’ll only need to bake the stuffed peppers long enough for them to get soft. So, about 25 minutes.

If you’re using precooked rice, same goes. Sometimes you can get away with as little as 20 minutes if you like your peppers a bit more crisps.

Remember I said I own 4 pressure cookers now? Well, I’m going to confess something. That isn’t because I have COOKED in them a lot. I can. I’ve canned stuff for years.

I live on a farm. I grow gardens. Blah, blah. So, I can stuff. I am only now learning to cook in a pressure cooker.

But they worked out. It took 3 tries, but they worked. 12 minutes set on high and sealed. Then you have to do the vent thing and let it cool down before opening it...of course. But still, all in all, very fast.

I intend to make up a full conversion chart very soon BUT it’s already a little after 9 pm here. So, by the time I’m done typing this whole thing out, playing with pictures and getting you guys all notified its up…well, I’m already gonna be up late.

No complaints. The oil got changed in my truck, the house got cleaned, errands are done for a week or two and I got all the supplies ready to do some pretty epic canning...

That’s not going to happen until Thursday though. It supposed to be a LOT cooler. And since I live in an old farmhouse that does NOT have central air…I think I will wait another 48 hours.

SOOOO hopefully tomorrow I will have time to do the conversion chart and get it posted. If not, I’ll have it up asap…someone remind me if I forget, please 😊

Okay, babbles completed. Now on to the legal stuff before we proceed to all the slow cooker stuffed peppers yumminess… 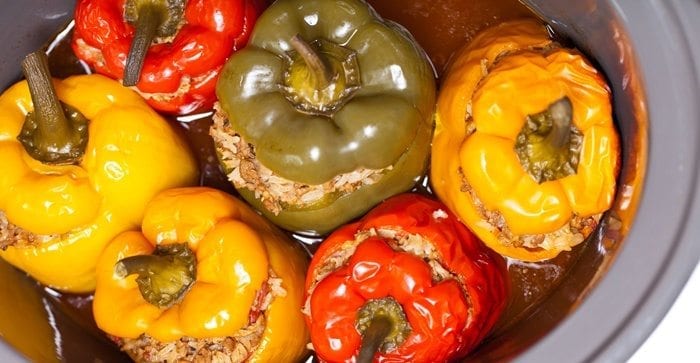 Legal Note: This post may contain affiliate links. What does that mean? That means, if you click on a link and make a purchase, SlowCookerKitchen.com will sometimes make a small commission. That does NOT mean your price increases. That means I’ve found a product I use and love OR I’ve researched bunches and believe it will help out with cooking and stuff. So, thanks for clicking anything that looks interesting and supporting Slow Cooker Kitchen. Much appreciated.

I had to start off with the classic one. Classics have become classic for a reason after all. And this classic dish is nothing but pure comfort food. 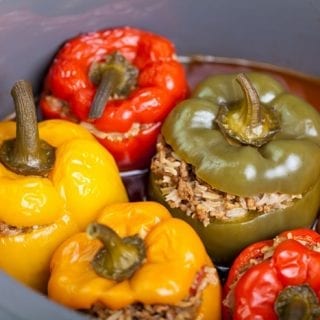 Gwen
There are LOT of stuffed peppers recipes. And I mean LOTS. Lots of ways to cook them too. But sometimes the classics are just what you're looking for.
Print Recipe Pin Recipe
Prep Time 10 mins
Cook Time 6 hrs
Total Time 6 hrs 10 mins
Servings 4 servings

This one isn’t my recipe. It’s a friend’s recipe from down south. She was the one that helped me do the 110 Crockpot Freezer Meals cooking session.

It’s an oven recipe. And as most authentic Cajun recipes go…it’s a bit involved. It IS worth it though. These are really good.

There’s also a converted “Creole Slow Cooker Stuffed Pepper” Recipe down below the authentic version. I did it and it’s good.

But honestly, it isn’t as good as hers. So, you make them whichever you want if you decide to try this recipe.

Lori over at The Kitchen Whisperer has a really good-looking pressure cooker option for Mexican Stuffed Peppers.

So, if you’re in the market for a pressure cooker version, I would try hers. They look yummy.

If you’d rather stick with the crockpot, here’s a link to our Mexican Crock Pot Stuffed Peppers. 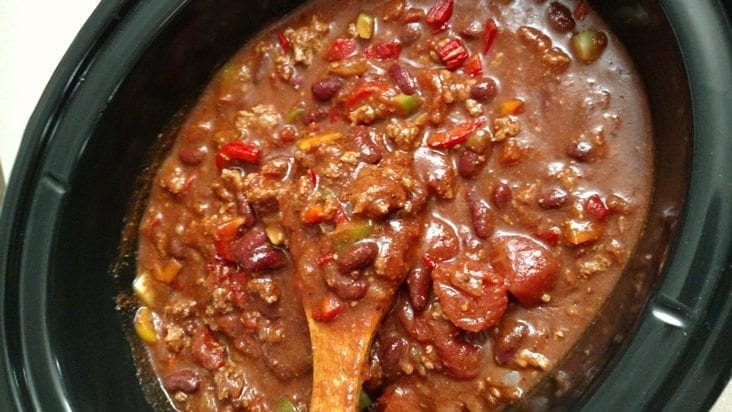 How about chili? Chili is one of those things a lot of folks CRAVE once the weather turns cooler.

Why not make up a large batch of crockpot chili, freeze half of it for later and use it to make this stuffed pepper recipe?

Gwen
The amount of chili you'll need to make these slow cooker stuffed peppers will vary. It will depend on the size of the peppers. There's NOTHING hard about this recipe. And it's really good too!
Print Recipe Pin Recipe
Prep Time 10 mins
Cook Time 4 hrs
Total Time 4 hrs 10 mins
Servings 4 servings

If you’d like to try making this recipe in the oven, you might want to check out this Classic Stuffed Peppers Recipe. It uses mostly the same ingredients as our slow cooker version by uses the oven to finish them off.

Pin It for Later Options for Crockpot Stuffed Peppers 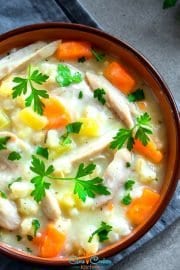