Boy oh boy, life's busy.  Sometimes its obligations and responsibilities... Other times it's what we want for ourselves.  Me personally, I've found planning AND follow-through are the keys to finding that last part.  Time for me.  And on that note, Slow Cooker Kitchen is starting a new series of crockpot meals for the week. 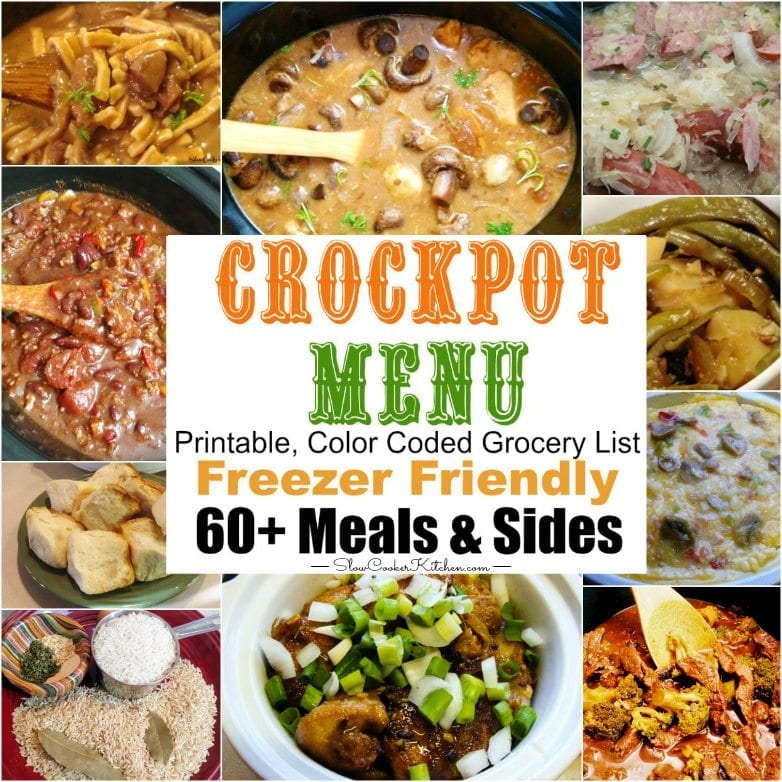 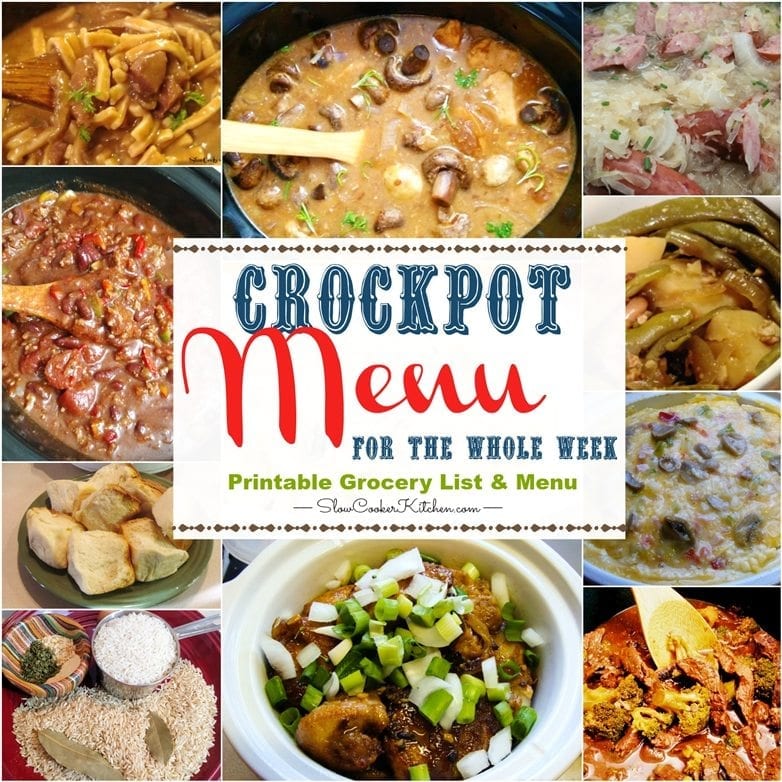 Some of the recipes will be older loved recipes...stuff that's always welcome on the menu.  Some, of course, well be new yummy creations.  All of them will be tested in our kitchen.  And honestly, since it's just ME (no helpers in this kitchen or on this website frankly...just Gwen)  I might miss a menu here or there.  Because there's the farm, the kids and grands, remodeling, a list of other obligations I won't bore you with, and about 52 things on my to-do list... life stuff (yeah, that busy part I mentioned earlier).

So this is an attempt to find more time.  I've had a couple requests for weekly menus over the last couple months...and our crockpot freezer meals has helped a lot of folks...so I figured I'd give it a shot.

If you have any requests or ideas...let me know.  I'll do my best to incorporate them along the way.  Soooo...here's the first shot at our crockpot meals for the week!  Hope you enjoy and it'll help you to Rock that Crock too 🙂

I'm starting the menu on a Saturday...I know, weird right?  Nope, not for me.  It's practical...at least for me.  Do you need to start the same day I do? No!  You start it up on a day you can pre-cook a few things.  My goal (and I might not always accomplish it) it to make this crockpot menu planning work for one crockpot.

I own a LOT of slow cookers.  Now that's in part because of the story of why SlowCookerKitchen got started...it's in the "about" area if you want to read it.  It's also partially because I have a slow cooker recipe website to run.  So it's part being practical and part a weird obsession that's grown over the last 20 years.

But whatever the cause...I'm ATTEMPTING to do the menus for one slow cooker only.  I am sure I won't always accomplish this, but it's a goal.  And that goal it to be practical and useful for YOU.  So here we go...

#1: Leftovers (from all of the dinner recipes listed above)
#2: Fakeout “Reuben’s” made with Crockpot Kielbasa and Sauerkraut leftovers

So how does this get pulled off with only one crockpot?  It's not too difficult.  It just takes a little bit of planning and making a few notes in your planner (or on your planner if you keep yourself organized electronically)...

And Saturday is the big day to cook here.  And it really is NOT that "big" either.  I just have to be around.  Saturday worked for me here because we had trees cut down earlier this week.  Not by choice, but by necessity.  They were dead.  Some because of their natural life cycle, and some because of that stupid ash borer beetle infestation.

Now they are all over the yard and waiting for us to cut them up, split them and stack for firewood for a year or two.

SOOO, my Saturday is obviously going to be very busy once I publish this and send out the newsletter 🙂

Last night, while watching a movie...I popped green beans.  I don't know about you guys or where you live but during winter, I miss fresh veggies.  So when I can find them either on sale, I get them.  Sometimes I get them anyways as a splurge.  So I popped green beans and cooked Crock Pot Green Beans on low overnight. If you can't find OR don't want to buy fresh green beans both frozen and canned green beans work just fine.  The green beans went on right before bed last night and came off at 8:30 this morning.

Then went on the crockpot rice.  I scooped out the green beans and transferred them to a large glass bowl and put it in the microwave.  Not to cook it, but to allow it to cool without covering it.

Rice is easy to cook on the stove but if you're busy, cooking it in the crockpot will allow you not to have to babysit it.  It went on at 9:15 am and is due to come off between 11:30 and noon.

Then goes on the crockpot cornbread.  It will need to cook for about 3 hours on high.  And it will need to cool for a few minutes before it gets popped out.  So my estimate on time will be going ON about 12:15 or 12:30 and coming off around 3:30.

THEN the last crockpot cooking for the day will be Ham & Cheese Breakfast Casserole.  This and oatmeal (which is not crockpot for now, but I'm trying to do without burning it) will be breakfast for the week.

It's going in the slow cooker around 4 pm then coming off about 9:30.  That'll give it time to cool completely before putting in in the refrigerator (If you refrigerate it before it's mostly cooled it will retain a LOT of water...it can be gross, not recommended)

So what about Saturday's dinner?  I didn't toss that in the crockpot right?  Nope, I didn't.  We'll be having the skillet version of Slow Cooker General Tso Chicken...'cause I said one crockpot.

BUT, if you want to cook with two slow cookers, you can do that of course...just toss it on in the morning and then serve it with some of that crockpot rice.

To accomplish both this AND cutting, stacking and splitting firewood all day, it took planning it out.  Printing the recipes...which you can do too and I recommend.  Then planning out an estimated cook time.

Then I just put reminders on my phone, alarms to tell me to go inside, wash up and change something over.  It's not the ideal situation but hey, it's farm life...

Sunday's cooking session will have to start just a little bit earlier.  For me, this is because it's my in-laws 61 st anniversary and an accomplishment like that should be celebrated.  Plus...there will still be wood to clean up.  So for Sunday, I'll only be making "cheater" crockpot bread...not cause the biscuit couldn't be made in the oven.  But because putting them in the crockpot changes the texture and they are almost like yeast rolls.

The rolls only take a couple hours to cook then I'll put on the main meal for the day.  And for their anniversary celebration, we're going to have Crock Pot Beef and Noodles, those cheater rolls and a side salad.  I'm buying a pie to go with it.  They both prefer pie to cake and it's their day so they get what they want...  I'm buying it because I will NOT have time to deal with dessert and I can admit that to myself.

Monday thru Friday Crockpot Meals for the Week

The rest of the week is pretty simple.  And most all of these can easily be prepped ahead as freezer meals too.  That's discussed down below a bit...

Not counting the side veggies and the two bread recipes, this menu makes up 60 healthy portions.  I always try to estimate conservatively because I'd rather have a little too much than not enough...especially when we have guest, or are taking it as a potluck meal.

So, the quantities I need, you might not need.  Some of us cook for two, some for ten.  Some of us like leftovers and some don't.  Differences (as long as they are respected and respectful) in my opinion, make life interesting.  And that includes our family structures.

So, on that note, here's why this menu plan is structured like it is...

Are These All Crock Pot Freezer Meals?

Most of these recipes can be freezer meals.  Some before cooking, some after and others work for either.  Only the Angel Chicken didn't work for me.  The breakfast casserole can get a bit soggy when you warm it up.  But you can easily remedy that by allowing it to cool completely after cooking it (and before freezing it).  You can also freeze the breakfast casserole raw but you have to beat the eggs first, you can't freeze them as they come out of the shell.

Here's the detail on the freezer meal options:

Printables & Pin It For Later Options 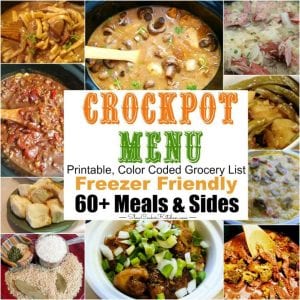 Crockpot Meals for the Week #1

Gwen
If your life's busy and you want to do something to help with the hectic pace...check out our crockpot meals for the week. There's a color coded printable grocery list, color coded key and lots more!
Print Recipe Pin Recipe
Prep Time 2 hrs
Total Time 2 hrs
Servings 60 servings 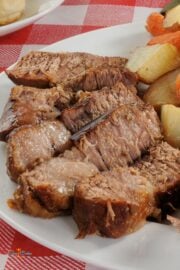